4 Classic Men’s Fashion Trends That Are Making a Comeback

Posted on Jul 27, 2018 | Posted in |
There’s a common belief that everything in fashion comes back around for another spin. It seems that’s never been more accurate. On one hand, there’s a part of men’s fashion that’s fixated on futuristic, apocalyptic streetwear. But the world’s best dressed men seem to be preoccupied with the high stylings of yesteryear. The following trends are taking over runways, red carpets and soon, a sidewalk near you. 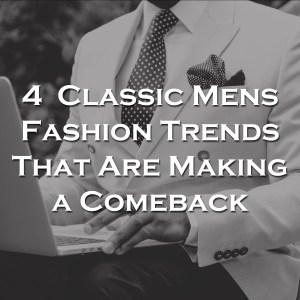 At last month’s Golden Globe Awards, Ryan Gosling accepted his award for Best Actor in a Comedy or Musical in a breathtaking white dinner jacket. Surrounded by guys in standard black tuxedos, his dinner jacket stuck out like a sore thumb—for all the right reasons. The white dinner jacket has historically been reserved for the most formal occasions. And many traditionalists believe it should be reserved for Spring and Summer only. However, Gosling is ushering in a new infatuation with the look. It’s a great way to differentiate your tux and turn the black-tie dress code on its head without being underdressed. Just stay away from the red wine.

There are many parts of the 60s that people love and remember fondly. The rebellious music. The activism. The free spirit of the country’s youth. But perhaps it’s the mod style of the era that’s causing some major nostalgia right now. Whether you’re thumbing through an issue of Esquire or scrolling through your Instagram feed, you’ve surely noticed the resurgence of men wearing turtlenecks with blazers. Formerly an exclusive move of style mavericks, the everyday guy is embracing it. It’s a way to make a blazer pop without following tradition. And even though a dress shirt and tie are missing, the combination feels fresher and, dare we say it, dressier.

Before the mod style of the 60s, there was the conservatism of the 50s. Back then, athletic men wore saddle shoes and bucks during mildly strenuous physical activity. The style caught on with women, and the shoes became wildly popular with everyone. In modern times, the saddle shoe was relegated to the golf course, and the buck was a mysterious shoe choice that only well-informed gents knew about. That isn’t the case now. Saddle shoes and bucks are becoming the most desirable way to show off some personality with shoes. Styles like our Denver Bison Leather Saddle Shoes and Spencer Suede Sport Buck Shoes offer more than a simple way to match your belt. They lead the entire outfit

During January’s expansive Men’s Fashion Month, where designers showed men’s collections in Florence, Paris, London and New York, it was apparent that business casual was back. Even the most avant garde designers had embraced it. But this isn’t just a blue woven dress shirt and khakis. The modern business casual involves tailored neutrals and sophisticated layering.

While it’s true that all fashion comes back in style at some point, these traditional style moves in particular have been updated for a new generation of fashion-aware gentlemen.