Posted on Jul 27, 2018 | Posted in |
When it comes to major style moves, the world’s most famous men always serve as a great touchpoint for inspiration. As men have become more style conscious in the last decade, a lot of attention has been paid to shoe choice. It’s often said that shoes make the man, and that’s most certainly true. But these days, shoes aren’t being used to refine a look; they’re adding in personality. The following 5 guys are experts at using saddle shoes and bucks to keep their looks fun. 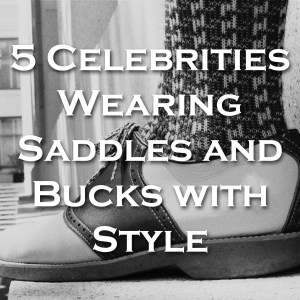 Ryan Gosling is arguably one of the greatest actors of our generation and recently had an amazing run with the modern musical La La Land. However, one area where he doesn’t get a lot of credit is style. From a white dinner tux on the red carpet to some killer off-duty looks, he’s just as talented in the fashion department. He often throws on a pair of saddle shoes to add a touch of classic whimsy. To evoke his 2011 Cannes white carpet look, try our David Oxford Saddle Shoes—a two-tone saddle with walnut leather.

Known as the NBA’s resident style maverick, Russell Westbrook is no stranger to bold style. He’s used his love of bright colors and crazy patterns to design capsule collections for Barney’s. He recently graced the pages of GQ in a pair of light brown bucks, which perfectly complemented his tropical dress shirt and gray suit. You might not be as adventurous as Westbrook but you can certainly replicate his shoe style. Our Spencer Suede Sport Bucks come in either dirty buck suede or white nubuc and help ground any modern look with a classic vibe.

These days, Orlando Bloom might be known more for who he’s dating than what characters he’s playing. But one thing that’s consistent is his look. His aesthetic is always clean and sophisticated. That’s aided by some excellent shoe selections. Here’s a guy who doesn’t lean on saddle shoes to loosen up a stiff outfit. He builds his ensemble around the shoes, opting for brightly colored socks, loose ties and relaxed fit pants.

Woody Allen might seem out of place on a list with so many young stars of today. But the prolific and controversial filmmaker is a saddle shoe pioneer. Just take a look at any press photo of Allen from the 70s and you’ll find him in a pair of well-worn saddle shoes. He’s scored some late-career hits with Blue Jasmine and Midnight in Paris, and he’s still scoring with his fashion as well. Try our Denver Bison Leather Saddle Shoes to achieve a look that’s equal parts modern, classic and Woody Allen quirky.

Bruno Mars is a showman for the ages. He’s built a career singing songs that look back to the past. He’s infectiously retro, and the same could be said about his personal style. Whether he’s gracing the pages of your favorite men’s magazines or gliding across the stage at the Grammys, he’s often doing so in saddle shoes. And he brings an element of cool to these shoes that they’ve never seen before.

If you want a master class on how to pull off saddles and bucks, look no further than these famous men.