The Evolution of Modern Shorts

Posted on Jul 27, 2018 | Posted in |
Not many garments have experienced as rich a history as shorts. And few clothing items continue to be debated as heavily. Popular satirist Fran Lebowitz made headlines in 2015 for her view on men’s shorts. “Men in shorts are disgusting,” she told Elle magazine. “There are few things I would rather see less, to tell you the truth. I’d just as soon see someone coming toward me with a hand grenade.” Her comments seem harsh (they are), but her reasoning stems from the shorts’ young beginnings. 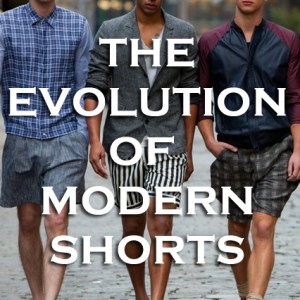 Back in the 1890s, the only people wearing shorts were young boys. In that era, they were referred to as short knee pants, and they were worn with stockings. They were more of a uniform. It wasn’t until the early 1900s that men started wearing an adult version called knickerbockers. These were wide-legged trousers, resembling parachute pants, that were tucked into high socks.

In the 1930s, the modern version of shorts first appeared among servicemen and servicewomen. They also gained popularity as attire for athletic and causal activities but despite their rising popularity, wearing shorts in public was a major social taboo.

How taboo? Shorts were so controversial that the Men’s Dress Reform Party was founded to advocate for men’s fashion rights. Starting in 1929 and running for almost a decade, the party pushed for the right to wear shorts in public without being vilified. Their activity mainly took place in the UK while groups of college protestors fought the good fight in the states.

During World War II, soldiers who fought in tropical locales donned shorts to stay comfortable in rising temperatures. Unknowingly, these respectable men were fighting another war, slowly chipping away at the social perception of shorts. From this point onward, shorts became more acceptable. However, the idea that only young boys belonged in shorts took many decades to change.

Throughout the 1900s, many types of shorts were introduced for various activities. Bermuda shorts firsts surfaced for military men in 1900. The first version of board shorts, surf trunks, debuted in the 1950s. Everlast released the first boxer shorts in 1925 then Cutoff denim shorts became commonplace in the 1960s and cargo shorts blasted onto the fashion scene in the 80s.

In the last 5 years, men’s shorts have gone through a noticeable change. As cargo short sales dropped for the first time in a decade in 2016, it became clear guys were searching for something more sophisticated and mature. Just as the reigning pant fits are slim and skinny, the same aesthetic has spread to today’s shorts. They’re often cut slim and feature 5-7” inseams.

The modern short works just as well at a barbecue as it does at more formal events. While it’s still unacceptable to wear shorts to a black-tie fundraiser, the new breed pairs well with sharp footwear like our Verona Driver Loafer and high-quality accessories like the Warwick Suede Belt.

Regardless of how Fran Lebowitz or other cultural critics feel about men in shorts, it’s clear that the modern short is the most stylistically advanced version in history.