The History of the Kick-Down Heel

Posted on Jul 27, 2018 | Posted in |
When you conduct a quick Google search of the term kick-down, you’re likely to come across articles about car parts before you learn anything about shoes. Kick-down is a colloquial term used by gearheads to describe an automatic transmission. Automatic transmissions were designed to make driving easier. In that sense, a classic kick-down transmission and a kick-down heel have a lot more in common than you’d expect. They were both created to make our lives as simple as possible. 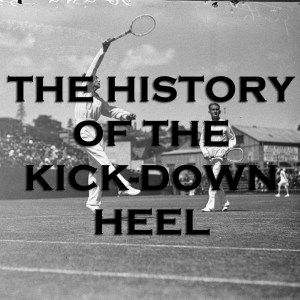 In shoe terms, the heel has a very technical definition. The Art of Manliness provides a great one: “The back portion of the shoe that comes into direct contact with ground and gives elevation to the foot when the shoe is worn. Heels are often built from 2 to 4 pieces of leather called lifts and reinforced with rubber or metal.” Basically, the heel of your shoe coincides with the heel of your foot. It’s the part that hits the ground first when you’re walking. However, a kick-down heel is flat, unlike the elevated heels on your favorite dress shoes. It allows you to keep your feet grounded and supported. It provides basic comfort and makes it easy for you to slip in and out without needing to lace and unlace.

Though the kick-down heel’s history isn’t as defined as that of the different shoe construction methods, its first appearance can probably be traced back to the creation of plimsolls.

Plimsolls first turned up in the 1830s as canvas shoes with rubber soles that were intended as beachwear. Then, they were called sand shoes by the British beachgoers who were first adapters. It wasn’t until the 1870s that they took on the name plimsoll. Plimsolls, in their original form, are still worn for gym class in many parts of the UK. In the 1920s, plimsolls transitioned to the mainstream American market as Converse All-Stars. They adopted the same canvas make-up with a rubber sole. However, it was then that that the kick-down heel began to take on a more defined look and purpose.

Today, you find the kick-down heel offered on men’s shoes which are designed for comfort. From surf and skate shoes to everyday casual kicks, the kick-down heel is the major draw. The objective? The wearer should be able to step in and step out with ease, all made possible by the heel design. Our Aspen shoe follows in this tradition as an expertly crafted shoe designed for ease, comfort and style.

Kick-down heels are an integral part of casual men’s footwear. Though you may not know the name or have insight into shoe construction details, you’ve likely benefitted from the design for years. They’re a part of shoe history that’s here to stay.