The History of the Shag

Posted on Jul 27, 2018 | Posted in |
You don’t need to be a resident of the South to know about the history of the Shag. The highly technical dance first originated as the Carolina Shag but is still widely recognized today as a major category in most dance competitions. In fact, North Myrtle Beach is home to the annual National Shag Dance Championship each year, the most recent installment of which took place in late January. It’s a classic dance born out of Southern tradition that’s still a symbol of dance proficiency and fun. 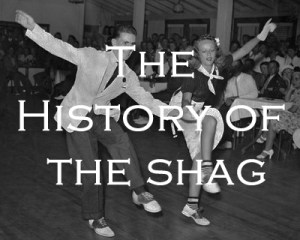 Officially, the dance is defined by six counts and eight steps. It’s typically performed to the beat of Beach Music, which is characterized by a 4/4 time signature. In other words, this isn’t a slow dance. It’s a quick yet specific dance method that requires great skill for perfection. Think of it as an offshoot of Swing.

The original name, Carolina Shag, surfaced in the 1940s. Somewhere between Wilmington, North Carolina and Myrtle Beach, South Carolina, the term started circulating. According to some historians, the term came specifically from Carolina Beach in North Carolina. The Carolina Shag was thought to be a distant cousin of the Carolina Jitterbug. It was created during a time when Americans were coming together to share a love of music and dancing.

The Big Apple was a popular dance at Fat Sam’s Big Apple Club. A derivative version, the Little Apple, was created soon after. These two dances led to the Carolina Jitterbug, and subsequently, the Shag.

Fast forward to 1989. Hollywood decided to pay tribute to the Shag with the aptly titled film, Shag. That movie, which starred of-the-moment actresses Bridget Fonda and Phoebe Cates, detailed the story of four high school friends who road tripped to Myrtle Beach. The Carolina Shag was prominently featured throughout their adventure.

Even country music got in on the Shag craze. The legendary Alabama showed their love of the Shag on their 1997 single, “Dancin’, Shaggin’ on the Boulevard”.

Move forward even further and you land in an unlikely place—the Steve Harvey Show. The popular daytime talk show host dedicated a 2014 episode of his show to a couple who’d mastered the Carolina Shag. He even revealed he’d been studying and practicing the dance for the past year.

On one hand, the Shag remains a lively time capsule of a past era—one in which dance was woven into the fabric of American culture. On the other, it’s responsible for a revival that’s captivating new generations. This can be seen in the Beach Music radio stations still on the air, the competitions and TV shows that still pay tribute and even in the some of today’s style like our The Shag Handsewn Penny Loafer.